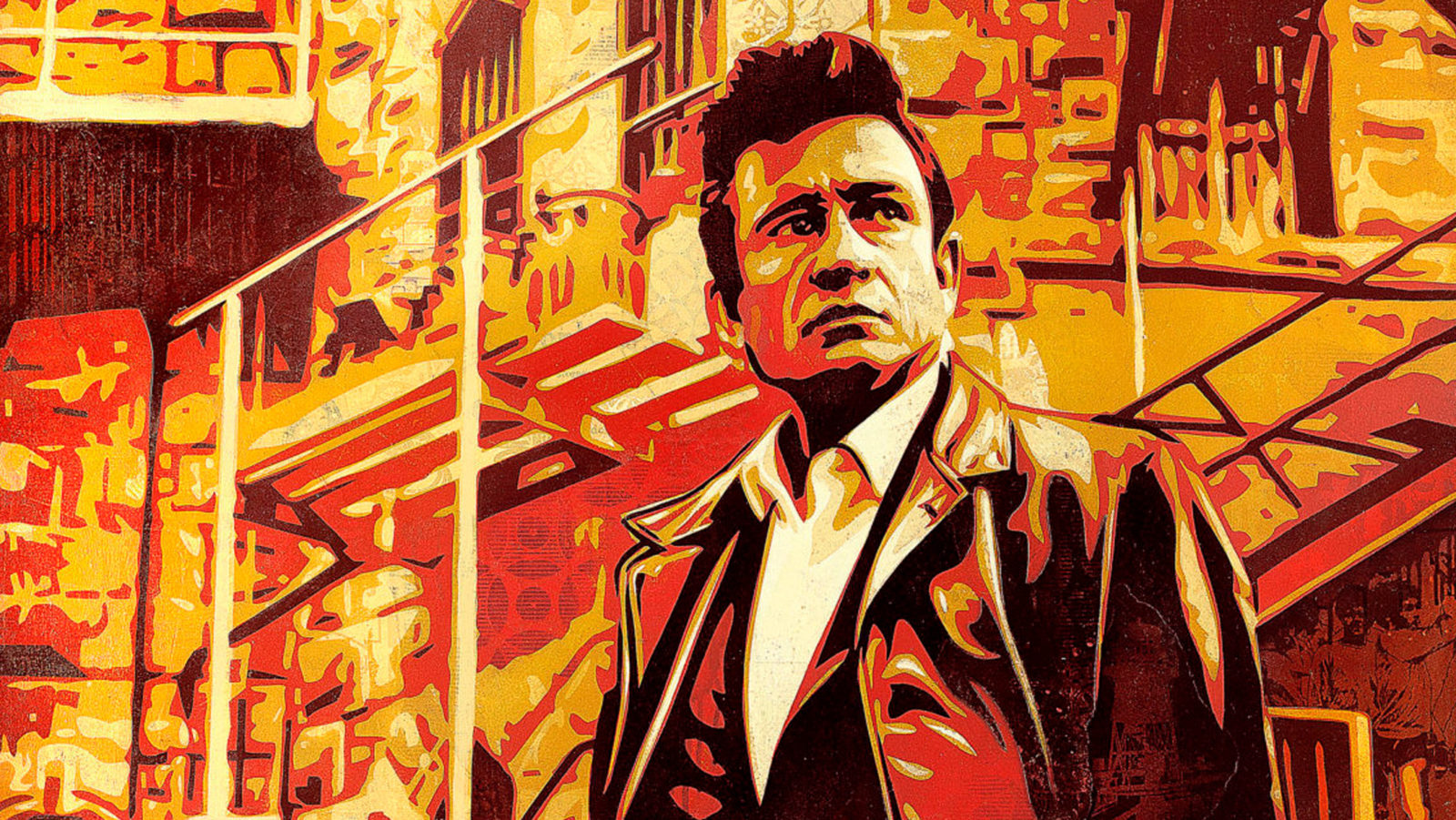 “Jim Marshall documented some of the most important historical and cultural moments in our country. His photographs are amazing raw material to work with, and it’s incredibly meaningful for me to create art based on these images. My aim was to amplify them by bringing something new but also remain true to the feeling that Jim captured.” – Shepard Fairey

ECHO PARK – Subliminal Projects is pleased to bring American Civics to Los Angeles, featuring the first-ever collaboration between Shepard Fairey and the estate of legendary photographer Jim Marshall. The exhibit will showcase Fairey’s interpretation of Marshall’s iconic photography from the 1960’s with mixed media paintings on canvas, large format serigraphs, handcut rubyliths, works on wood and metal, as well as Jim Marshall’s original photography. The exhibition will also include a collection of artworks by Shepard Fairey inspired by the current political climate.

Seeking to tackle these issues, American Civics coupled with Fairey’s other works presents both a historical and contemporary look at divisiveness and how these issues underscore the current tone and mood of the country. The work is intended to cultivate dialogue and encourage vigorous solutions to problems that have divided the country and eroded the core of American ideals.

To further this effort, a portion of the proceeds from this collaboration will go to the following charitable partners dedicated to promote change for these five core issues:

The foundation of American Civics is a Fine Art Limited Edition series of five serigraphs: Voting Rights, Mass Incarceration, Workers’ Rights, Gun Culture, and Two Americas. Each title is limited to an edition of 100 prints, and each is hand signed and numbered by Shepard Fairey, and stamped by Jim Marshall Photography LLC.

There are four portfolios of the American Civics print series, which will include the Jim Marshall Limited Edition Estate photograph of each subject in a portfolio box designed by Fairey.

Called the most celebrated and prolific photographer of the 20th century, Jim Marshall is widely known for his iconic music photography. Marshall photographed unguarded moments of his subjects, such as Janis Joplin lounging backstage with a bottle of Southern Comfort and Brian Jones and Jimi Hendrix strolling the Monterey Pop Festival fairgrounds. His camera captured Johnny Cash’s groundbreaking concerts for prison reform at Folsom Prison and San Quentin Prison. In a career that ended with his untimely death in 2010, Marshall shot more than 500 album covers; his photographs are in private and museum collections around the world.

Jim Marshall Photography LLC was established with the primary goal to preserve and protect Marshall’s extraordinary legacy as a discerning photojournalist and a pioneer of rock-and-roll photography. The estate is continuing the legacy of Jim Marshall through sales and licensing, exhibitions, publishing, and the development of a comprehensive catalog as a reference for the totality of his life’s work. The Jim Marshall Estate is proud to collaborate with Shepard Fairey in bringing awareness to the social justice issues that underscored Marshall’s passion for photography and life.

Shepard Fairey was born in Charleston, S.C. He received his Bachelor of Fine Arts in Illustration at the Rhode Island School of Design in Providence, R.I. While there he created the “Andre the Giant has a Posse” sticker that transformed into the OBEY GIANT art campaign, with imagery that has changed the way people see art and the urban landscape. His work has evolved into an acclaimed body of art, which includes the 2008 “Hope” portrait of Barack Obama, found at the Smithsonian’s National Portrait Gallery.

Fairey’s 25-plus-year career started in 1989 with his sticker campaign. In addition to his guerrilla street art presence, the artist has executed more than 75 large-scale painted public murals around the world as of 2015. His works are in the permanent collections of the Museum of Modern Art (MoMA), the Victoria and Albert Museum, the Smithsonian’s National Portrait Gallery, the Boston Institute of Contemporary Art, the San Francisco Museum of Modern Art, and many others.

Subliminal Projects is a multifunctional gallery space promoting diverse forms of art while providing a forum for contemporary dialogue. It was established by Shepard Fairey and Blaize Blouin in 1995 and played an integral part in introducing skateboarding culture and design to the art world. Now located in the historic neighborhood of Echo Park, Subliminal Projects continues to offer a platform for artistic exploration and innovation. Gallery hours are Wednesday through Saturday from 12 to 6 pm. 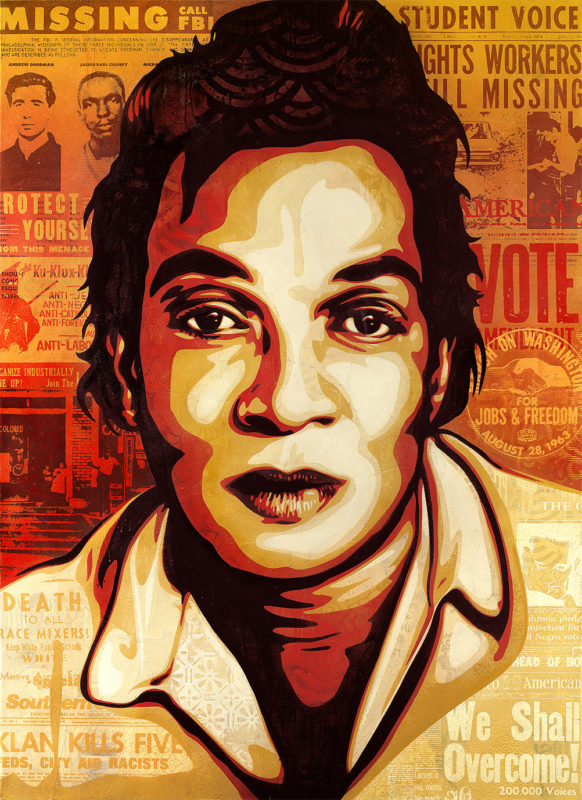 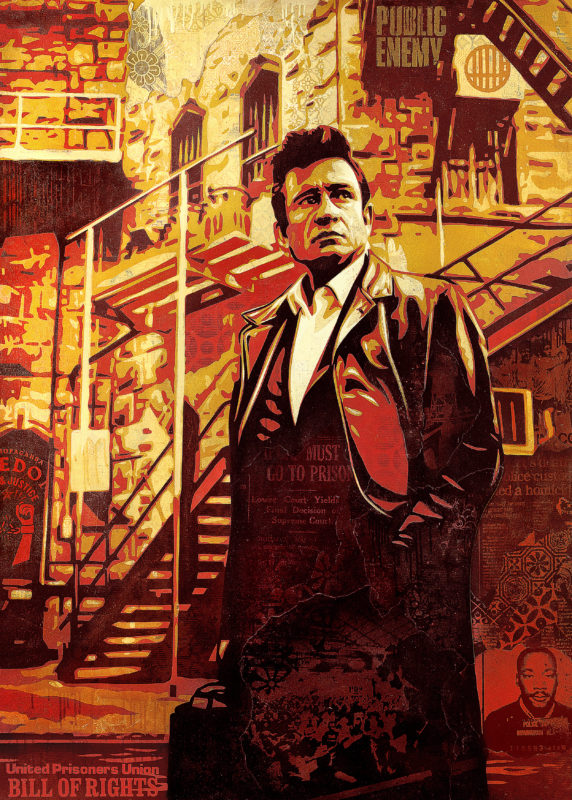 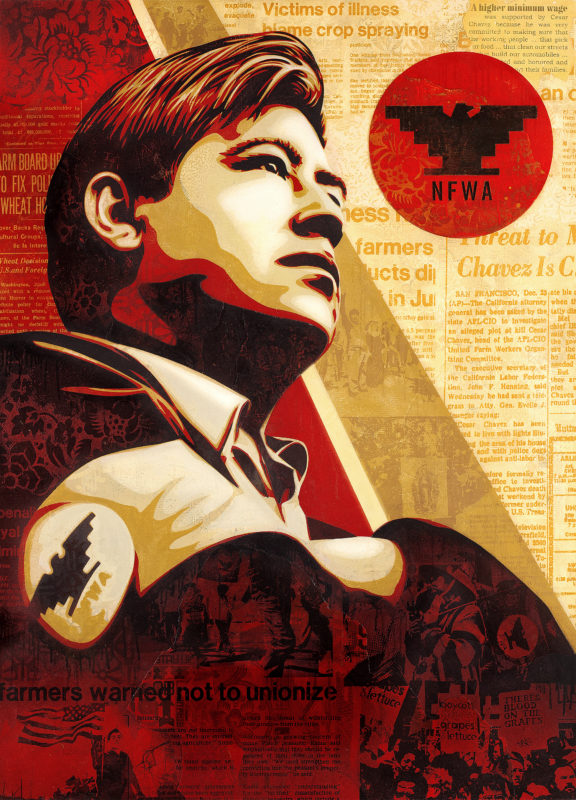 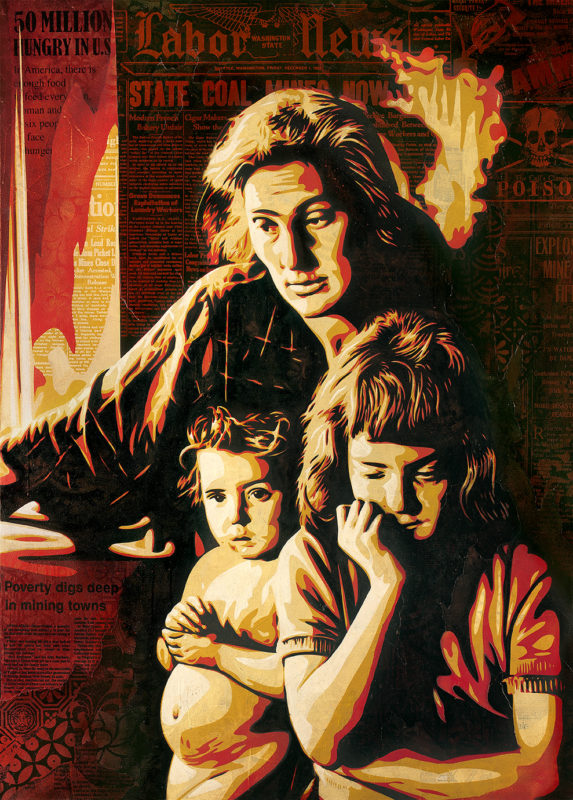 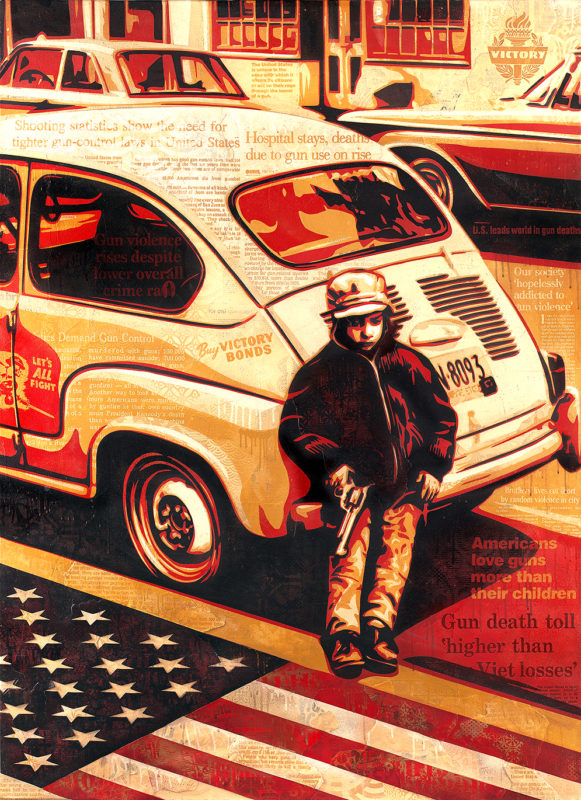 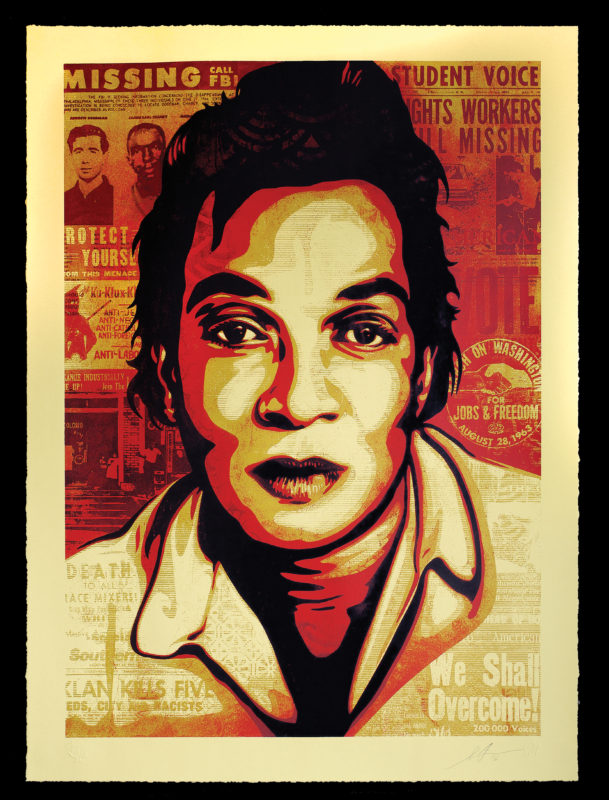 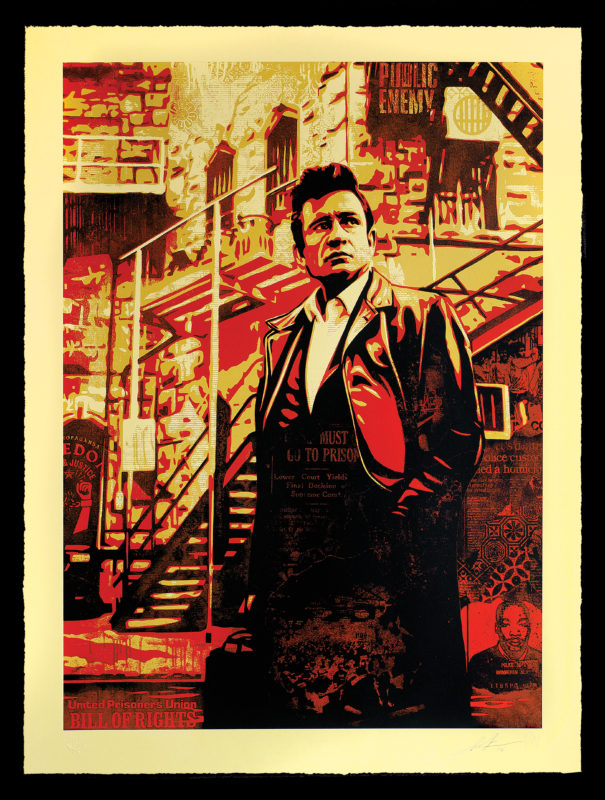 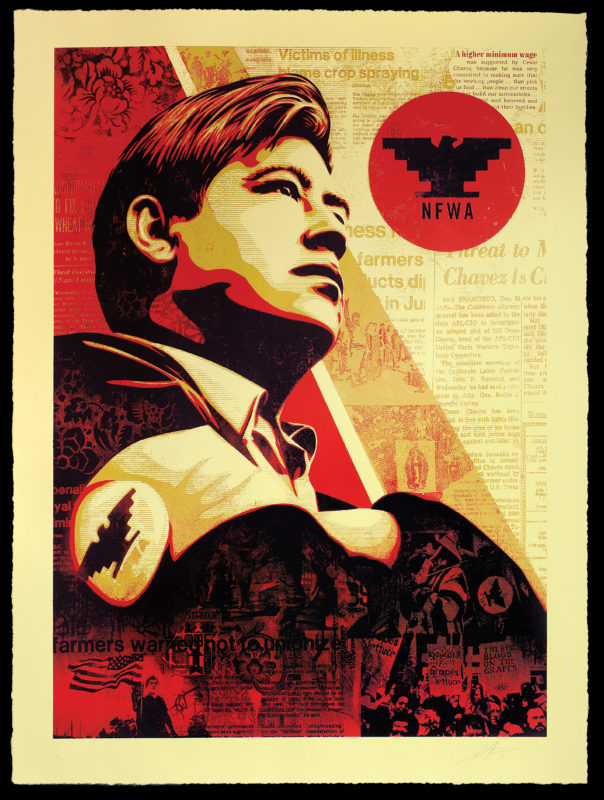 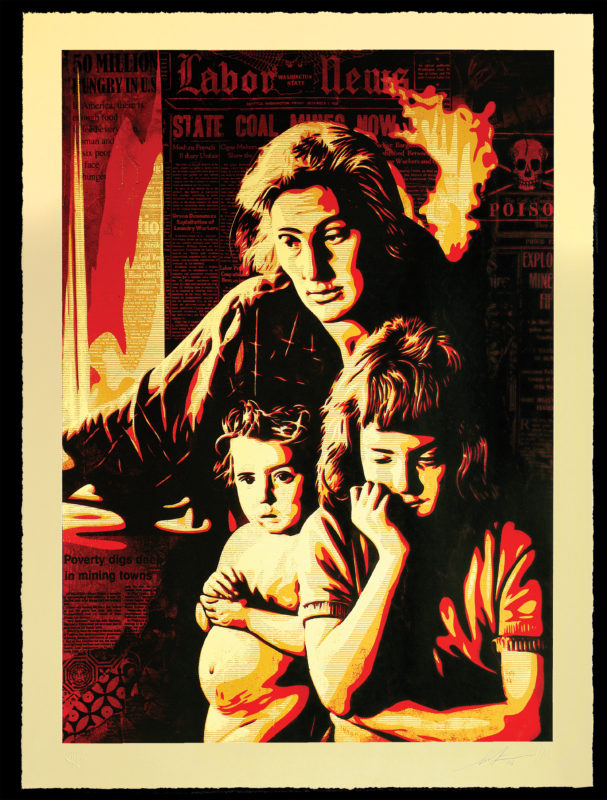 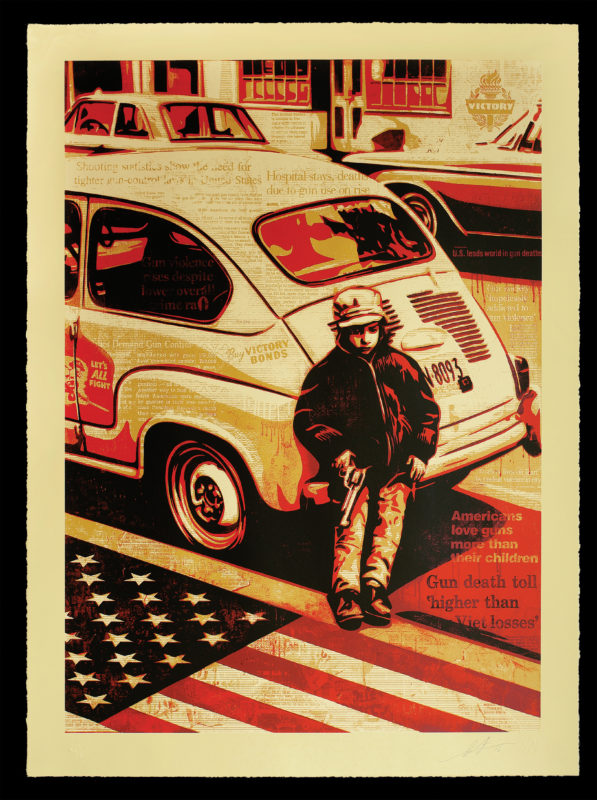